I’m not big a fan of cricket.

I’m not any type of fan of cricket.

I’ve enjoyed watching some games – especially watching NZ beat Australia in a thrilling Cricket World Cup match,  from a corporate box, while hosting a fun group of wine and hospitality industry professionals – but you can see why that would be difficult not to enjoy, quite aside from what was happening in the middle of Eden Park.

Even so, I was intrigued by a review I read of a book by Niki Harré. The book is called ‘The Infinite Game – How to Live Well Together’ and what got me hooked was the question: what if life was less like a test match and more like a game of beach (for me, backyard) cricket?

As a non-cricket fan, even I have played a bit of backyard cricket, but mostly I’ve enjoyed it as a spectator, watching from the deck of my in-laws’ home at Foxton Beach. When I remember times watching my children playing with their cousins, one of their cricket-mad uncles and my father-in-law on the front lawn (yes, that still qualifies as backyard cricket) a feeling of long summer days on holiday washes over me. I can almost hear the waves and smell the BBQ.

One of the older cousins, a handy bowler, goes hard out against his Dad and me when we’re batting. Yet he lobs easily-whacked lollipops to his younger siblings and cousins. There’s a massive cheer when the kids get an adult out, and an even bigger cheer when the youngest cousin manages to connect bat with ball. 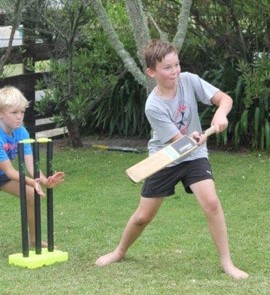 Those are cheating hands coming through the wickets (the black sticks)!

When one of my sons – sporty and competitive – dabbles at cheating, it’s very obvious cheating, playing the fool, but his older cousins are justified in quickly ‘punishing’ him with a fast ball or chasing him around the yard menacingly – normally ending in an impromptu wrestling-tickling match in the middle of the pitch.

One of the cousins calls time-out and goes to get a snack – prompting Nana to bring out drinks and treats.

Non-cricket-fan-types like me are lured in for a few overs, or to take a catch when the ball is lobbed onto the deck ‘by accident’.  Mums, Dads and grandparents get cajoled into putting their book (or wine) down to join in for a while.

One of the younger cousins decides he wants to play. Teams are shuffled and the boundaries are changed, but just for him, and when he’s bowling the rest of us have to bat wrong-handed. 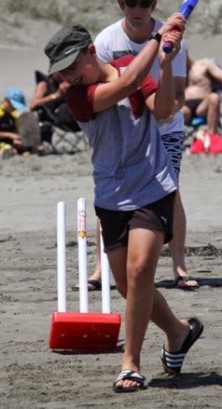 A smile despite being clean-bowled.

My oldest son, normally quite tough on himself, tosses his head back and howls with laughter when he’s bowled out for a duck.  We all take the opportunity to groan and make fun of the cricket-loving uncle when he hits the ball into a tree or under the house or some other hard-to-get spot. Other times we indulge him, admiring an especially classy shot he’s executed and then told us about.

The match gets called to an end when the kids are called in for dinner, but often only after there’s a chance for the losing side to even up the scores. The kids come in knowing who ‘really’ won, each making their case, and the highlights get described over dinner, embellished, and then told again.

I am a fan of backyard cricket.

Back to the book. It challenges the reader to recognise the games we play in life, and why. Through 100-odd workshops, the author has identified a set of ‘infinte’ values like family, love, community, honesty, inclusiveness, health and vitality, a clean environment, freedom, and creativity. The book asks us to consider how much of what we do is in pursuit of these infinite values and, more importantly, how we might make that a focus.

The implications are significant: stronger families and communities, happier healthier people, healthier environments and much more. Of course there’s the issue of our current economic reality to consider, but that’s the point. How much do we really consider it? Or do we plunge on, without questioning?

The author goes further than I’m entirely comfortable with, but that’s why I read a book like this every now and then, and it’s a read I thoroughly recommend.

I did feel somewhat let off the hook by the chapter on learning to live uncomfortably with my hypocrisy. As cited in the book, “I don’t think what the world needs right now is yet another group of people fucking off into the hills and creating a model of what most people can’t have.” It’s better to make some changes and be imperfect, than do nothing for fear of falling short of the ideal, or being perfect but ineffectual.

It’s a bit like being a non-cricket-fan being welcomed into a game of backyard cricket.  Participate. Hold the rules lightly – let the game’s and players’ needs shape the rules. Keep the game going.

One bounce, one hand. Over the fence on the full is six-and-out.  Howzaaaat!